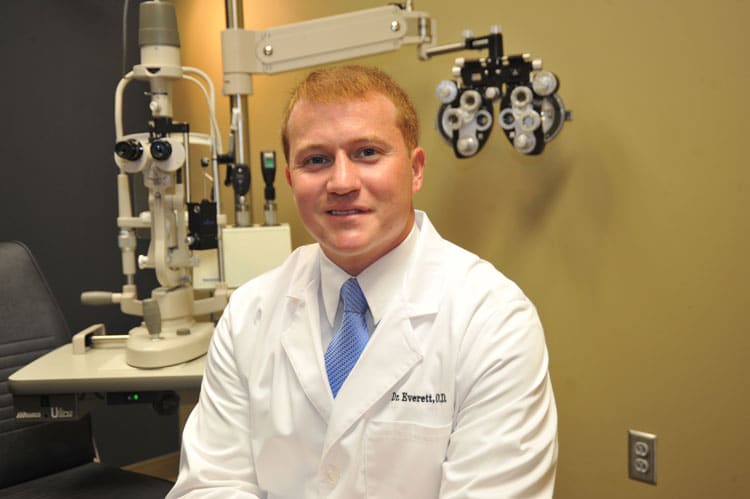 “I want to be as educated and skilled as possible to handle the most challenging of situations.”

Dr. Greg Everett has never shied away from a challenge. In 2002, right after his 17th birthday, he enlisted in the U.S. Marine Corps. So, one week after graduating from high school, he was in boot camp and by late 2003, he was deployed to Iraq in Iraqi Freedom II. Now that’s a challenge, but the quote above is actually referring to his job as an Optometrist with Drs. Campbell, Cunningham, Taylor & Haun.

“I like it when other doctors throughout the area refer challenging patients to me,” says Everett. “I take it as a compliment because they might be out of answers. When one of my patients leaves, I want them to have had the best patient experience possible and feel like they were in good hands.”

Dr. Everett’s life’s journey took him from Atlanta to Knoxville, with stops along the way in Iraq and Memphis. Young Greg grew up on the lake and spent his childhood on the water and playing various sports. His favorites were fishing, water sports and wrestling in high school. “I won a few wrestling tournaments,” he acknowledges modestly.

But Greg didn’t stick around long to savor his accolades. The ink on his high school diploma was barely dry when he headed off to Marine boot camp and eventually, Iraq. A member of the infantry, Greg carried an M-16 and, as a four-time “Expert Marksman,” was Designated Marksman for his squad. “I was part of Operation Vigilant Resolve in Fallujah during April of 2004″, he recalls. “I had to grow up fast.”

After one year of deployment, Sergeant Everett came back to the states and worked as a recruiting officer. “I was still a Marine when I attended Middle Tennessee State University,” he says. “I was majoring in Physiology with the idea that I would eventually go to medical school, and along the way I did internships in Optometry and Pharmacy. I discovered that I really liked Optometry having always been fascinated by the vision system of the body,” he says. “And the specialized care provided by Optometrists really appealed to me.”

And so with his active duty at an end and his new degree in hand, Greg enrolled at Southern College of Optometry in Memphis. “As part of my studies, I did an externship with Drs. Campbell, Cunningham, Taylor & Haun,” he says. “I suppose you could say I was hooked on the Knoxville area. I just love everything about it, especially the people.” “I really enjoy working with all walks of life,” says Dr. Everett, “and particularly the younger patients. It’s really neat to get to know some of those patients and follow them and their families throughout their lives. Some of their ailments are serious and even painful and it’s inspiring to see how bravely they cope with them. It helps me keep life in perspective and I’m grateful to be in a position to help patients in great need. It’s a special feeling.”

“Most of what I work on is routine eye exams, contact lens fittings and comprehensive eye exams,” says Dr. Everett. “I also see patients with macular degeneration, glaucoma and dry eyes. “In a typical day, I’ll see a lot of ocular diseases and occasionally I get a difficult contact lens fitting. That’s the kind of challenge I love.”

What appeals most to Dr. Everett about practicing at Drs. Campbell, Cunningham, Taylor & Haun is the unlimited opportunity for further learning. “Every day, I’m seeing patients for Glaucoma Treatments, Macular Degeneration and various eye infections. With six Ophthalmologists and four Optometrists on the team, each day is a learning opportunity for me.”

“The beauty of Drs. Campbell, Cunningham, Taylor and Haun is the ability to refer, in house, to an Ophthalmologist and in some cases, our Retina Specialist,” says Everett. It is all under one umbrella. I can refer my patients for cataract, blepharoplasty and retina disease. It’s really convenient for our patients. They don’t have to fill out new forms or become a patient at yet another practice.”

But the most satisfying part of Dr. Everett’s job is the patient interaction. “I get Christmas cards from patients,” he says. “I have a 92-year-old macular degeneration patient who recently told me she’s bringing me a gift on her next appointment. I love East Tennessee and my patients are something special.”

Dr. Everett particularly loves when patients refer to him as, “my eye doctor.” “That tells me I’m doing a good job and they have a great deal of comfort with me,” he says. “That kind of trust is something that I have to earn and something I have to work to keep.” It can be a real challenge, but then, Greg Everett has never shied away from a challenge.

To unwind, Dr. Everett works out regularly at the gym and plays golf. And he often makes a dash for the Florida panhandle where he and his brother board their boat in pursuit of red snapper, cobia, mahi-mahi and mackerel.

We’re here for you and can schedule an appointment
24 hours a day, 7 days a week. 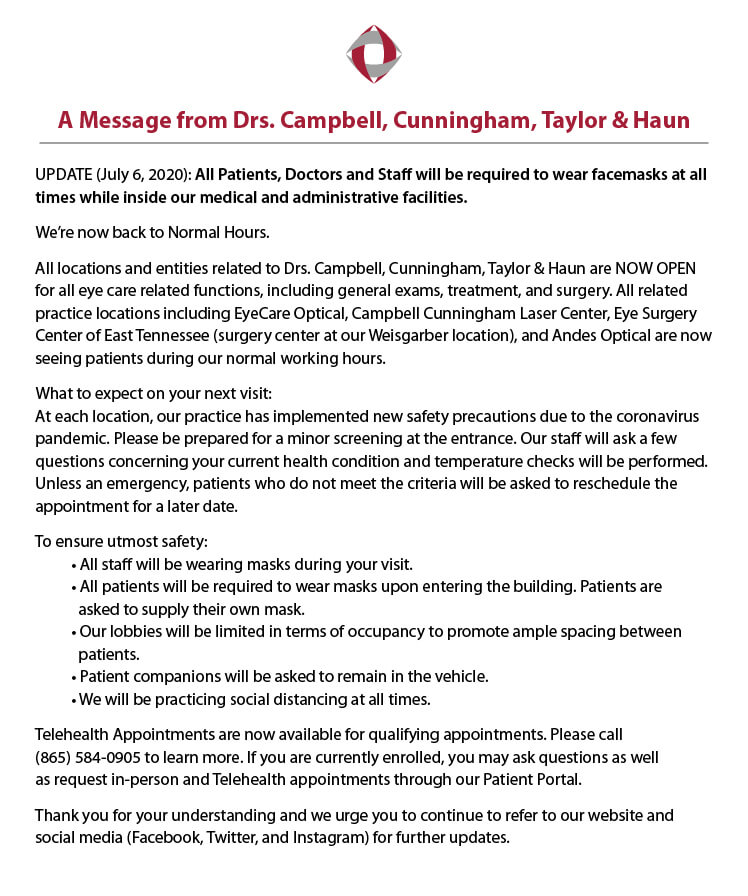