“I wanted to be part of a team invested in eye health, committed to the most advanced tools for early diagnosis with the latest technology for the most current treatments available.”

Throughout her years in college and residency, the former New Yorker had been developing a love for the South, first the beaches of the Carolinas, and then the mountains of East Tennessee and she is delighted about the professional move that brought her to Knoxville, where her boyfriend since college works and lives. They enjoy hiking in the Great Smoky Mountains, spending time on the many lakes and rivers of East Tennessee, shopping at the city’s farmer’s markets and UT sports.

Kathryn (Katie) Kibler, O.D. is especially excited about the opportunity to diagnose and treat ocular diseases as a board-certified optometrist for Drs. Campbell, Cunningham, Taylor and Haun eye care team.

Along with general eye care, screening patients for eye issues and treating eye trauma, Dr. Katie Kibler provides comprehensive eye exams and contact lens and glasses prescriptions for patients of all ages at EyeCare Optical locations throughout the Knoxville area, and at the group’s main office on Weisgarber.

Dr. Kibler explains that it was her intensive hospital-based residency in primary care and ocular disease at a Veterans Administration medical center in North Carolina that gave her such a concentrated background in eye disease and traumatic eye injury. “Our patients’ stories were hard to hear, but I was so inspired by their courage. Despite dealing with the severity of eye trauma and disease, many incurred while serving our country, these veterans were so grateful and gracious,” she recounts. “Whether helping a World War II veteran or a twenty-something soldier injured during a tour in the Middle East,” Dr. Kibler continues, “it was so gratifying to be able to have a meaningful impact on their life.” 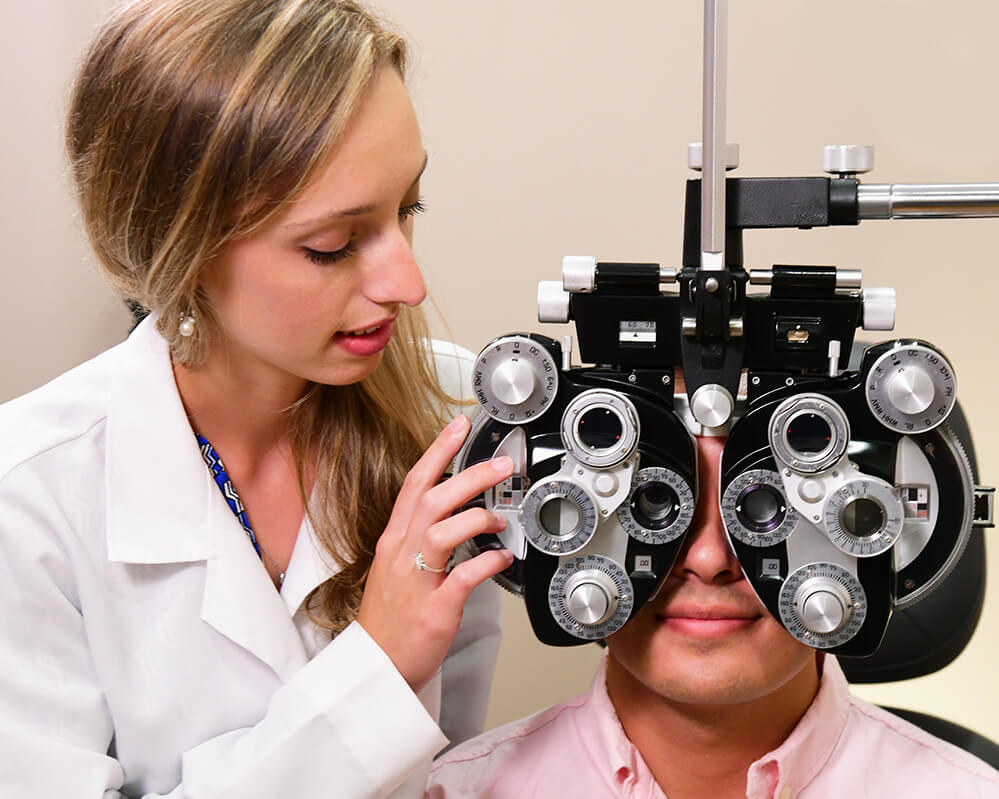 But Optometry was not even on Dr. Kibler’s radar screen growing up in Western New York in a town just outside Rochester. She enjoyed spending time boating and fishing with her “outdoorsy” family on the region’s famed Finger Lakes, as well as in the performance arts – playing piano and training in dance. Her father’s career was in banking and she thought she would perhaps follow in his footsteps. So, when it came time to choose a curriculum for a career path, she began college a double accounting and economics major at Furman, a private liberal arts university in South Carolina.

However, halfway through her undergraduate years, she realized sitting behind a computer at a desk all day working with spreadsheets was not for her. What she really wanted was a different kind of profession with a purpose, where she could spend all day working with people to make a more personal impact on their lives. She began to rethink her academic track.

Turned out her dad was still responsible, in part, for inspiring her shift in careers. When she was twelve, her father had suffered a retinal detachment and the family became intimately involved with the day to day post-surgery aftermath of ongoing care and monitoring that was required for recovery. Just a few years later, her brother had orbital surgery after he was hit in the eye when a baseball rocketed out of the pitching machine. Again, her family learned a lot about eye trauma surgery and its effects. As she sought counsel from her father, her family and friends about career options, those life-changing experiences with eye care professionals came back to her with a whole different level of meaning.

Fortunately, she was still able to finish her accounting degree in four years, while adding in the pre-requisite courses for an optometry school that was highly recommended to her. While she earned her Doctor of Optometry at the Pennsylvania College of Optometry at Salus University, Dr. Kibler gained a wide range of primary optometry care as well as ocular disease experience in a series of externships in eye care centers in Philadelphia, Charleston and Mt. Pleasant, South Carolina and Woodbury Heights, New Jersey, culminating in her year-long residency at the V.A. medical center in Salisbury, North Carolina, where she also had rotations with a retina specialist.

“I knew I didn’t want be part of a practice that just prescribed glasses or contacts and rushed people out the door. My residency was all about ocular disease diagnosis and treatment. I wanted to be part of a team invested in eye health with the latest technology in vision improvement and committed to the most advanced tools for early diagnosis and the most current treatments available. That was all very important to me.”

She found what she was looking for with EyeCare Optical and the dedicated team of Ophthalmology specialists at Drs. Campbell, Cunningham, Taylor and Haun. She had heard about the practice from a patient report– the father of her boyfriend had a very successful LASIK procedure at the Campbell Cunningham Laser Center. She interviewed with the group and when asked about her breadth of experience in managing and treating ocular disease, she knew she had found a professional home.

She is thrilled to be part of a team with a distinguished history of pioneering advanced eye care technologies and treatments in the Knoxville area.